Faidon Moudopoulos-Athanasiou graduated from the Department of History and Archaeology at the University of Crete in 2013. He completed his MA in Aegean Archaeology at the University of Sheffield (2014) focussing on the Bronze Age of the montane landscapes of Epirus. In 2016 he obtained an MA in Heritage Management from the University of Kent and the Athens University Business School. For this MA he received a research grant from the Piraeus Group Cultural Foundation and his thesis concerned the design of heritage education programs. In 2017 he won a White Rose College for the Arts and Humanities (WRoCAH – AHRC) competition award for his proposal to study the archaeology of early-modern Zagori (NW Greece) and began at the University of Sheffield his PhD research, which he completed in 2021. Throughout his PhD, he remained a Scholar of the A.G. Leventis Foundation, which also sponsored his research.

He has studied and worked in various European and US academic environments. In 2012 he studied for a semester in the Université Lumière Lyon 2 and partook in landscape archaeology fieldwork at Mont Bégo with the Paris Institute of Palaeoanthropology (Erasmus scheme). In 2016 he worked for three months at the Römisch-Germanisches Museum in Cologne (Erasmus Plus scheme) and in January – March 2019 he was a visiting scholar at Brown University (Research Employability Project (WRoCAH – AHRC). The period of his PhD research coincided with the bid of the Greek Ministry of Culture to inscribe Zagori in the World Heritage List as a Cultural Landscape and he was an academic consultant in this endeavour. 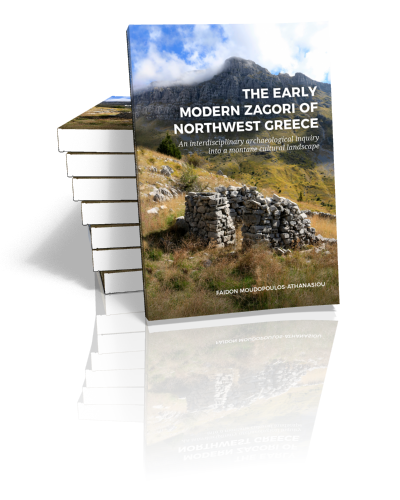 An interdisciplinary archaeological inquiry into a montane cultural landscape

Landscape-archaeology projects have had a significant impact on our understanding of the deep history of the Greek countryside, but have overwhelmingly been limited to the plains and have rarely placed the Ottoman period at their…