Inspired by her father’s Dutch Caribbean heritage, in 2011 she began studying the impacts of Curaçao’s change of political status within the Kingdom of the Netherlands. This research, which formed the subject of her MA thesis in Latin American Studies at Leiden University (2012), included interviewing and attending the events of the Curaçaoan community in the Netherlands.

Moved by her desire to return to her roots as an educator, in 2013 Eldris joined the Nexus 1492 team, thereby combining her research interests in education policies and Caribbean cultural heritage. Since then she has dedicated her research efforts to studying, from teachers’ perspectives, how indigenous heritage is taught in the current social studies curricula. Being an educator, Eldris was very much interested in conducting her study from a teacher education approach so as to highlight the valuable contributions of teacher knowledge to research on education in the region.

During her time with Nexus 1492, she presented her research at international conferences, as well as collaborating with research fellows and producing articles and educational resources. Lastly, as part of her research activities, she organized workshops in collaboration with local stakeholders and education authorities for teachers of primary and secondary school education in the countries in her study.

Con Aguilar, E., Álvarez, A. Frederick, C. and Hofman C.L. (2017) Teaching Indigenous History and Heritage. Reviving the Past in the Present: Caribbean Experiences from the Dominican Republic and Dominica. Creative Education 8, 333-346. 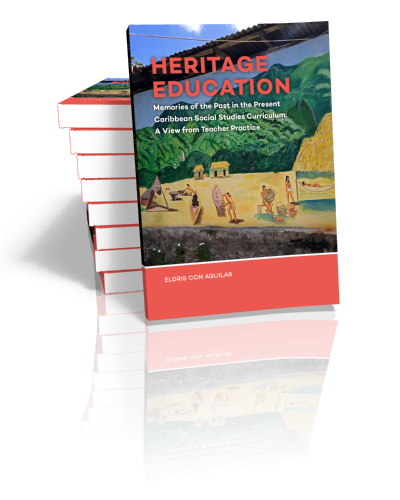 Memories of the Past in the Present Caribbean Social Studies Curriculum: A View from Teacher Practice

This book compiles the results of a doctoral research study that sought to gain insight into how indigenous heritage is represented in the school curriculum for social studies. To this end, the questions focused on…