During and after completing his studies, Ruud was employed as an archaeologist at Grontmij archaeology in the Netherlands, where he worked on numerous commercial archaeological projects dealing with remains from every major period in northwestern European history. In late 2011, Ruud became the island archaeologist of St. Eustatius, a position he held for two years. During this time, he managed SECAR, conducted various commercial archaeological projects, organized several student field schools, and was involved in public outreach.

Recognizing the need for sharing archaeological research with the general public, Ruud founded Terramar Museum on Bonaire, an archaeological museum displaying the story of 7,000 years of Caribbean history. The museum opened in August 2016, and Ruud took on the position of director for the first year of the museum’s existence.

He now organizes multiple underwater archaeological field schools, research projects, and expeditions every year on St. Eustatius and other locations around the world.

Stelten, Ruud
2015 An Emporium for All the World: Commercial Archaeology in Lower Town, St. Eustatius. In Managing our Past into the Future: archaeological heritage management in the Dutch Caribbean, edited by C.L. Hofman and J. Haviser. Sidestone Press.

Stelten, Ruud
2015 Archaeology on St. Eustatius: heritage management of an 18th-century slave village at Schotsenhoek plantation. In Managing our Past into the Future: archaeological heritage management in the Dutch Caribbean, edited by C.L. Hofman and J. Haviser. Sidestone Press.

Stelten, Ruud
2010 Relics of a Forgotten Colony: The Guns of St. Eustatius. Journal of the Ordnance Society, No. 22. 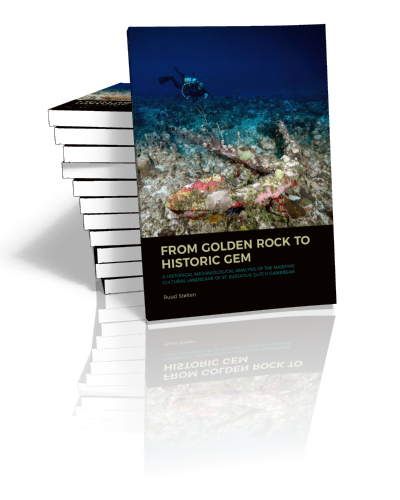 From Golden Rock to Historic Gem

St. Eustatius, a small island in the northeastern Lesser Antilles, was one of the busiest ports in the eighteenth-century Atlantic World. Contested between the Dutch, French, and English, the island attracted thousands of ships a…