Dr Alison Sheridan is Principal Curator in the Department of Scottish History and Archaeology at the National Museum of Scotland in Edinburgh. Alison’s research focuses on the Neolithic, Chalcolithic and Bronze Age of Britain and Ireland within their wider European context.

She has written extensively on the Mesolithic-Neolithic transition, and as Co-Ordinator for Britain and Ireland in the French-led Projet JADE she has published on Neolithic axeheads from the Alps. She also specialises in the use of of jet and jet-like materials, faience, amber and gold. Recent publications include “Jade. Grandes haches alpines du Néolithique européen. Ve et IVe millénaires av. J.-C. (with Pierre Pétrequin et al, eds, 2012 ); “Is there a British Chalcolithic?” (with Mike Allen and Julie Gardiner, eds, 2012), sections in “Ritual in Early Bronze Age Grave Goods” (Ann Woodward and John Hunter, eds, 2015), and “Amazing Amber” (with Andrew Ross, 2013). Alison was President of the Prehistoric Society 2010–2014. 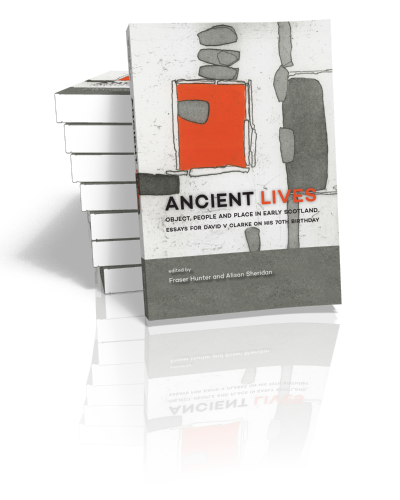 Object, people and place in early Scotland. Essays for David V Clarke on his 70th birthday

Ancient Lives provides new perspectives on object, people and place in early Scotland and beyond. The 19 papers cover topics ranging from the Neolithic to the Medieval period, and from modern museum practice to ancient…