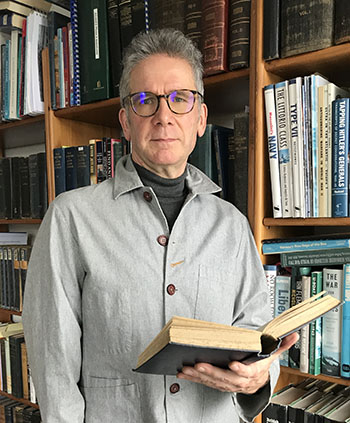 Innes McCartney is a nautical archaeologist specialising in the interaction of shipwreck archaeology with the historical record. In 1999, he discovered the 12-inch-gunned submarine HMS M1 off Start Point in the English Channel. In 2001, he discovered the wreck of HMS Indefatigable, sunk at the Battle of Jutland. In the same year he led expeditions to identify some of the U-boats sunk during Operation Deadlight. Fourteen U-boats were surveyed, and several new sites discovered.

In 2003 he identified the mystery World War I U-boat off Trevose Head, Cornwall as UB-65 by scraping the propellers to reveal the shipyard stamp. This proved that even at 60 metres’ depth, war graves of this type can be identified by divers without the need to scavenge parts from them. This featured in the Channel 4 series Wreck Detectives.

In 2006 he featured in the documentary “U-boat Death-Trap” which followed his search for the identity of three mystery U-boats off the north coast of Cornwall. In the same year he discovered the German auxiliary raider HSK Komet in the English Channel. At the time, it was the only known example of this type of warship anywhere in the world.

In 2008 he found the White Star Line transport SS Armenian off the Scilly Isles. In 2012 McCartney worked alongside wreck hunter David Mearns on an archaeological investigation of the wreck of HMS Hood, sunk in 1941. This project was supported by philanthropist Paul Allen aboard his yacht Octopus. The expedition findings were featured in the Channel Four documentary “How the Bismarck sank HMS Hood”.

2014 saw publication of “The Maritime Archaeology of a Modern Conflict: Comparing the archaeology of German submarine wrecks to the historical text”. It shows the extent to which historical sources relating U-boat losses in UK waters in both world wars differ from the actual distribution of the known and identified wrecks. Over 40% of those investigated had no historical precedent. The accuracy of the historic text fell as low as 36% during 1945.

In 2015 and 2016 McCartney worked as archaeological advisor to the Sea War Museum Jutland on detailed archaeological shipwreck surveys to locate all of the heretofore undiscovered wrecks of the Battle of Jutland. This was published in “Jutland 1916: The Archaeology of a Naval Battlefield” for which he was awarded the 2016 Anderson Medal by the Society for Nautical Research. The British submarine HMS Tarpon was also located during the North Sea surveys in 2016.

In 2016 he helped Scottish Power identify a World War I UB-III Class U-boat off the Wigtownshire coast which was found during the seabed survey for an undersea power cable between England and Scotland. McCartney has suggested the wreck is UB-82 or possibly UB-85 which were both sunk after attacks by British patrol boats in April 1918. In 2017 he assisted the Sea War Museum Jutland, in a detailed survey of the Scapa Flow naval anchorages. The results were published in May 2019 in “SCAPA 1919: The Archaeology of a Scuttled Fleet”.

In May 2020 it was announced that the wreck of the landing craft LCT 326 had been found off Bardsey Island during surveys by Bangor University, in collaboration with McCartney. The wreck is located over 100 nautical miles from its supposed loss position. In September 2021 as part of the same project, it was announced that the minesweeper HMS Mercury had been found in the Irish Sea. It sank in 1940 during sweeping operations. 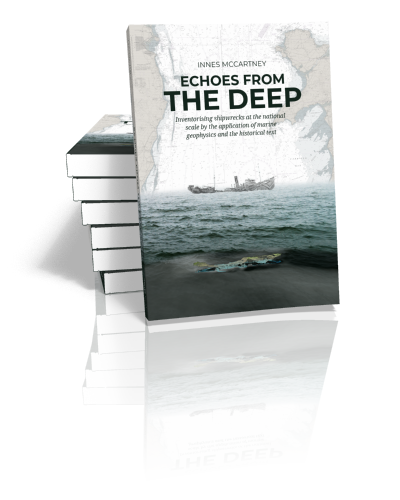 Echoes from the Deep

In a process analogous with the impact of aerial photography on landscape archaeology, marine geophysics is locating the remains of thousands of shipwrecks across the seabed of the globe. This research project set out to…