Keith Dixon presently lives in Christchurch with his wife Hegnes, and their two younger children, Edwin and Eileen; their two older children, Krista and Harry, and their families live in England. The author’s family ties are to Northumbria; and his wife’s to Nikunau Island. Keith and Hegnes met in Port Moresby, where they were because of aid projects. In their subsequent places of abode, they have been members of I-Nikunau or I-Kiribati diasporic communities on Te Ika-a-Maui, Tarawa, Great Britain and Te Waipounamu.

Keith’s academic and accounting career has included spells in several locations including the English Midlands, Port Moresby, Tarawa, Buckinghamshire and both main islands of New Zealand. He has worked for organisations as diverse as Wolverhampton, Cannock and Nottinghamshire Councils, the UK Government Department for International Development, the Institute of Public Administration of Papua New Guinea, Kiribati Institute of Technology, Kiribati Centre of the University of the South Pacific, and Massey, Keele and the Open Universities.

He has been at his present workplace, the University of Canterbury | Te Whare Wānanga o Waitaha since 2007. As well as work on Kiribati, his academic outputs have mainly concerned organisational change, social responsibility, governments, universities, hospitals, mining corporations and accountant education. 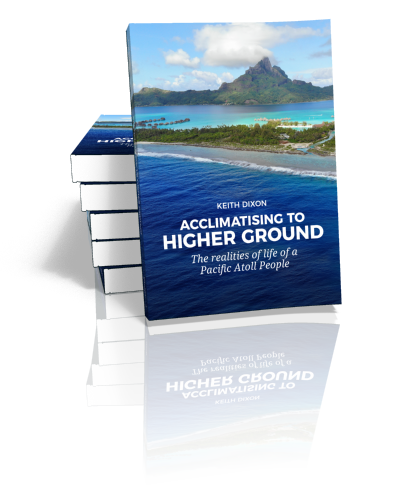 The realities of life of a Pacific Atoll People

Life for people on atolls is hard, affected by droughts, rough seas and other adverse climatic conditions, and now, rise in sea level threatens their very inhabitance. No wonder kinship is the foundation of atoll…