Francine Brinkgreve was born in 1956 in Amsterdam, the Netherlands. After obtaining her Gymnasium diploma in 1974, she studied Cultural Anthropology at Leiden University.

During her studies she specialized in the cultures of Indonesia, under supervision of Professor A.A. Gerbrands and Professor P.E. de Josselin de Jong. She also studied museology with Professor P. Pott, Bahasa Indonesia under Professor A. Teeuw, and Balinese culture with Dr H.I.R. Hinzler. As part of her studies, she conducted fieldwork in Bali.

She received her Master’s (doctorandus) degree in 1984, with a thesis about the meaning of offerings in Balinese culture.

From 1988 until 1990 Francine Brinkgreve received a scholarship from WOTRO and the Program of Indonesian Studies to conduct Ph.D. research, including fieldwork, on the subject of offerings and ritual decorations in Bali. This resulted in the publication of a book for a general public, and several academic articles.

After various positions at Leiden University (Faculty of Social Sciences), the Bureau Indonesian Studies (BIS), the project Mondelinge Geschiedenis (Oral History) Indonesia of the KITLV and the Stichting Pelita, in 2004 she was employed by the Rijksmuseum voor Volkenkunde (National Museum of Ethnology) in Leiden as a member of the team carrying out the Shared Cultural Heritage Project, in cooperation with the Museum Nasional in Jakarta. In 2009 she became coordinator of this cooperative project and was then appointed curator for the Insular Southeast Asia collection at the Rijksmuseum voor Volkenkunde. Since the formation in 2014 of the National Museum of World Cultures, which includes Museum Volkenkunde in Leiden and the Tropenmuseum in Amsterdam, she is one of the two curators for the Insular Southeast Asia collection.

Francine Brinkgreve has been involved in many exhibitions and has written many articles and has (co-)edited books on various aspects of the material culture of Indonesia and the collecting histories of museum collections.

The completion of this PhD thesis was carried out as part of her function as curator, within the framework of the Graduate School of Social and Behavioural Sciences, Leiden University. 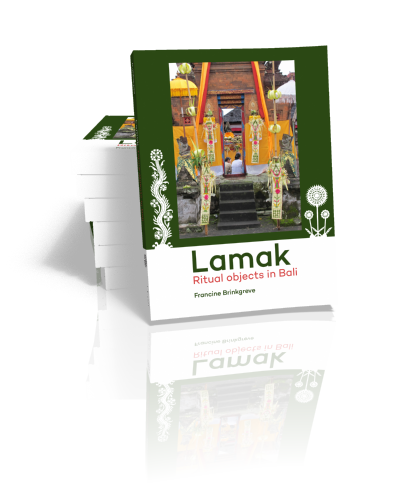 This is the first study to examine in detail ritual objects known as ‘Lamak’, a fascinating and unique form of ephemeral material culture which is a prominent feature of Balinese creativity. A lamak is a…